On 18 March 2020, a lecture on “Great Bolgar is UNESCO World Heritage Site” was held.

On 18 March 2020, a research associate of the Department of Guided Tours Organization of Bolgar Museum-Reserve Hramova G.K. held a lecture on “Great Bolgar is UNESCO World Heritage Site” for the students of the 1st grade of Bolgar Comprehensive School №1.
In 2010, an implementation of integrated project “Cultural heritage – the town-island of Sviyazhsk and Ancient Bolgar” began. The creation of museum and tourism infrastructure is of great importance in this project. During this time, three significant museums were built – the Museum of Bulgarian Civilization, the Memorial Sign in honor of adoption of Islam by Volga Bulgars in 922 and the museum “Healer’s house”. A unique exposition called “The history of Assumption Church” was created in the architectural monument of XVIII century. Four residential buildings in Nazarovyh Street were museified on local history subjects. Another object attracting visitors’ attention with its unique architecture and surrounding landscape is a complex “The White mosque”. Since 2016, a new tourist port works, which let take ships of different class.
The main event was the inclusion of Bolgar historical and archaeological complex in UNESCO World Heritage List in 2014. It was the recognition of the importance of Bolgar at the international level, which affected the growth of attendance of the museum-reserve. The growth pattern of attendance is the result of a great activity of the Republican Fund of Renaissance of historical and cultural monuments of RT on the establishment of tourism brand of “Great Bolgar”.
The students listened to the report with attention and saw a colorful presentation. Then they talked intensely, asked a lot of questions and gathered the puzzle pieces with the images of monuments.
At the end of the lecture, it was concluded that the collective of Bolgar Museum-Reserve successfully works towards the preservation of Bolgar historical and cultural heritage and its popularization. The kids expressed a great wish to visit the museum-reserve in the near future. 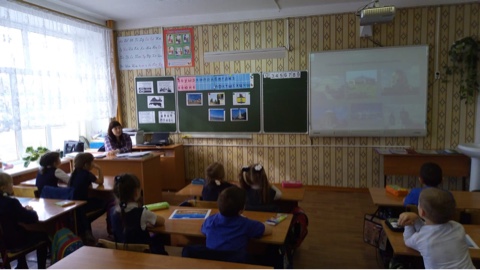